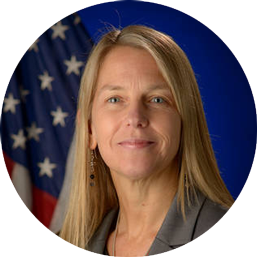 We are excited to announce that the Friday Keynote Address will be delivered by Dava Newman, former Deputy Administrator of NASA.

Recent space science missions to Pluto and Jupiter, the discovery of thousands of exoplanets, and orbital missions to monitor Spaceship Earth will be highlighted. Humanity will become interplanetary, and is on a journey to Mars. We are closer to reaching the Red Planet with human explorers than we have ever been in our history. Space agencies, academia and industry are working right now on the technologies and missions that will enable human “boots on Mars” in the 2030s. We are testing advanced technologies for the next giant leaps of exploration. From solar electric propulsion to cutting edge life support systems, to the first crops grown in space, the journey to Mars is already unfolding in tangible ways today for tomorrow. A three-stage plan will be highlighted – from missions close to Earth involving commercial partners and the International Space Station, advancing to missions in Earth–Moon orbit, or deep space, and finally moving on to Mars, where explorers will be practically independent from spaceship Earth. The innovation required to realize humanity becoming interplanetary cuts across science, human exploration and technology.

Fundamentally, education, knowledge and access are the keys to exploring our solar system, Spaceship Earth, and ourselves. The urgency of education about our own planet is shown through data visualizations accessible through online open platforms. The presentation concludes with an inclusive message on STEAMD (science-technology-engineering-arts-math-design) about changing the conversation. Online access and learning provide our greatest opportunities to reach the Mars Generation (anyone in school today) including the artists, designers, poets and makers. We are all astronauts on Spaceship Earth, and I believe through education and knowledge for allwe can turn our dreams in to reality.

Eleanor Roosevelt once said that the “future belongs to those who believe in the beauty of their dreams.”

Dr. Dava Newman was nominated in January 2015 by President Barack Obama and confirmed by the U.S. Senate in April 2015 to serve as the Deputy Administrator of the National Aeronautics and Space Administration. She was sworn in on May 15 and began her duties with the agency on May 18.

Along with NASA Administrator Charles Bolden, Newman is responsible for providing overall leadership, planning, and policy direction for NASA. Newman performs the duties and exercises the powers delegated by the administrator, assists the administrator in making final agency decisions, and acts for the administrator in his absence by performing all necessary functions to govern NASA operations and exercises the powers vested in the agency by law. Newman also is responsible for articulating the agency’s vision and representing NASA to the Executive Office of the President, Congress, heads of federal and other appropriate government agencies, international organizations, and external organizations and communities.

Prior to her tenure with NASA, Newman was the Apollo Program Professor of Astronautics at the Massachusetts Institute of Technology (MIT) in Cambridge. Her expertise is in multidisciplinary research that encompasses aerospace biomedical engineering.

Newman is the author of Interactive Aerospace Engineering and Design, an introductory engineering textbook published by McGraw-Hill, Inc. in 2002. She also has published more than 250 papers in journals and refereed conferences.