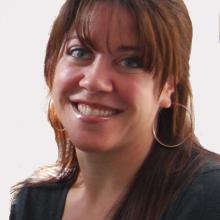 Sheri Conklin is the Director of e-Learning at the University of North Carolina Wilmington. She collaborates with colleagues to deign faculty professional development for online and web-enhanced course design and delivery. She also disseminates information regarding pedagogy for online and web-enhanced courses to the faculty through print and web media, as well as hosting socials. Sheri has taught both web-enhanced and fully online for UNCW for the last 8 years. Her prior experience includes Instructional Designer, e-Learning Instructional Support Specialist and special education teacher and department chair. Sheri earned a Bachelor of Arts in Art History and a teaching certificate in special education. She recently finished her Ed.D from Boise State University. 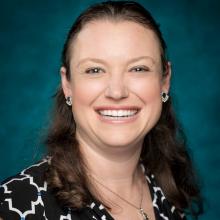 Amy Ostrom is an Instructional Designer with the Office of eLearning at UNCW who primarily works with the College of Health and Human Services and College of Arts and Sciences. She has a bachelor’s degree in English Education with an emphasis in Theater from Erskine College as well as a Master’s plus 30 in Special Education, specializing in Educational Technology and Content Delivery from the University of South Carolina. Amy has a professional interest in faculty/professional development, humanizing online learning, emerging technologies, UDL, authentic assessment, higher education leadership, and quality assurance measures for online courses. She loves collaborating with faculty to find ways to integrate technology into the classroom and beyond to meet the needs of all learners.

Ron works closely with the academic administrators and faculty to develop new programs, oversee coursework quality, as well as standards and creates faculty development programs for online instruction. Other responsibilities include expanding the use of advanced technologies in both online and classroom instruction and strengthening student support services. Ron has presented at national, and international conferences on topics related to faculty development and e-learning engagement.

Online learning has steadily grown into a prominent delivery method in higher education.  The number of college students taking online courses has increased every year since its inception. In fact, the observed growth rate was 3.9% from 2013-2014, which was higher than the previous year’s growth rate of 3.7% (Allen & Seaman, 2016). With the growth of online education, a similar rise has manifested with organizations, research studies and publications dedicated to this instructional delivery method (Perry & Pilati, 2011). Indeed, research on the effective methods of online education have also become prevalent (Means, Toyama, Murphy, Bakia, & Jones, 2009). Initially, many studies on the effectiveness of online learning have examined comparisons between face-to-face and online student achievement (Bernard et al., 2009).  The results of those examinations have determined that online instruction can be just as effective as face-to-face instruction. Recently, the rise of social media among millennials has posed the question of whether social media networks will increase engagement and social presence for online students (Ellison, Steinfield & Lampe, 2006).

The different types of online interactions, as the ones aforementioned, have been analyzed and categorized into a framework, also known as the Community of Inquiry (CoI) (Garrison, Anderson, & Archer, 2000). The CoI defines online educational experience as consisting of three presences: (a) social presence, which can be defined as the learner’s ability to present himself or herself as a ‘real person’ (Rourke, Anderson, Garrison, & Archer, 2001), (b) cognitive presence, defined as the degree to which learners can create meaning through sustained communication (Garrison, Anderson, & Archer, 2000), and (c) teaching presence, defined as the design and facilitation of instruction, including direct instruction for the purpose of creating social and cognitive processes to facilitate deep and meaningful learning.   (Anderson, Rourke, Garrison,  & Archer, 2001). These three presences overlap to create an effective learning experience. The CoI framework has been widely used and researched in online learning settings.  The analysis of the presences, specifically in online environments, has been the foundation of the CoI framework. For the purposes of this study, the social presence between students will be further examined.

Yellowdig is a student engagement tool that is similar to Facebook, Twitter, and Reddit that affords students the opportunity to  engage with peers in a manner that is comfortable and familiar as it follows the same rules and structure of traditional social media outlets.. Unlike discussion boards, students are subscribed to a feed rather than a discussion thread and have the ability to comment, like, love, and boost other students’ posts through these methods. It offers students and faculty a dynamic method to interact with one another. When using a traditional discussion board, often students are required to post an initial thought and then reply to two other posts. The theory behind Yellowdig is that students can interact with one another to achieve higher levels of learning and engagement in a manner that is more organic to the users’ social media tendencies (Gruber, 2016).

This qualitative research project sought to determine students’ engagement and social presence. Students were asked to complete a questionnaire using the social presence scales from the CoI instrument. The questionnaire included nine items to measure social presence (3 for affective express, 3 for open communication, and 3 for group cohesion) (Swan, Richardson, Ice, Garrison, Cleveland-Innes, Arbaugh, 2008). The questionnaire was modified based on recommendations from Lowenthal and Dunlap (2014). The students received twenty Likert scale questions (strongly disagree - strongly agree) to measure emotional/affective expression, open/interactive communication, and group cohesion. We will present not only our findings, but the implications and suggested methodology for employing more social media outlets to enhance social presence and student engagement.


PSI provides full-service solutions that allows institutions and organizations to better measure, assess and identify the skills, traits and abilities of learners seeking degrees, credentials and employment. PSI offers the most complete solution set for assessing the online learner at every phase of the education lifecycle – from psychometrics, secure proctoring and student authentication to soft skills, talent measurement and certification. At PSI, everything we do influences someone’s career.


Trusted by more than 1,500 colleges and universities, the patented Mediasite webcasting and video content management system quickly and cost-effectively automates the capture, management, delivery and search of live and on-demand videos for campus events, lecture capture and flipped learning. Learn more at www.sonicfoundry.com/solutions/education. We’re proud to be the webcasting partner for the 2018 Online Learning Consortium conferences.


Proctorio offers live, automated, record & review, and secure browser online proctoring. Our technology provides scalable, cost-effective solutions to validating student identity and activity during computer-based exams. We utilize machine learning and facial recognition technologies to monitor students during online exams, flagging suspicious behaviors within a digital gradebook at the conclusion of every assessment. Proctorio integrates directly within existing learning management systems, meaning there are no extra logins to remember, no scheduling of exams, and no changes to either course content or assessments. Proctorio is based out of Scottsdale, Arizona, and was founded by former ASU Online engineers. Staffed by current and former digital learning instructors and students, our implementation and support team is dedicated to student success and academic integrity. Proctorio levels the playing field for online students while promoting confidence in online academic programs, certifications, and employee testing. Visit Proctorio’s website today to learn more: https://proctorio.com


ProctorU provides distance proctoring services for colleges, universities and certification organizations that offer examinations online. The service allows students to take their exams from nearly anywhere in a secured environment. ProctorU uses a patent-pending three-step process that confirms that the student who registered for the exam is the student who is taking the exam and is following the institution’s testing requirements. The service is modeled after the in-classroom experience and proctors monitor the entire process in order to ensure that a high level of integrity is maintained throughout the exam process. ProctorU offers live, person-to-person, real-time monitoring to more than 1,000 colleges, universities and certification organizations, including the University of Alabama, the University of Florida and Northwestern University. ProctorU operates dedicated proctoring centers in Folsom and Livermore, Calif., Phoenix, Ariz., and Hoover, Ala. For more information, visit www.proctoru.com.


Remote-Learner has been providing educational technology services since 1982 to its business, educational and governmental clients. Today, these services include support for best-of-breed open source programs, including the world's most widely used open source learning management system, Moodle® and our enterprise solution Totara®.


Examity®, the world leader in ID Verification and Online Proctoring software and support, is a multimodal solution ideal for universities and corporations. The company has been recognized for enabling efficiency, security and convenience in online testing. Customers have the flexibility to select the appropriate level of security, including live, recorded, automated and mobile options. Support is provided around the clock and integration is included.

As the recognized leader in the industry, Examity® partners with more than 200 universities and corporations worldwide.

Please contact us at 855-examity or rgrosberg@examity.com for a demonstration.


Blackboard is education’s partner in change – helping learners and educators thrive in a complex and changing environment. Blackboard is the leading provider of learner success focused technology solutions and services. We help our clients through our broad portfolio of solutions and services that make education more accessible, engaging and relevant to the higher education student and institution. For more information about Blackboard, follow us on Twitter @Blackboard.