This session will examine an interactive augmented reality interface we developed, piloted, and have begun to evaluate in an upper-level biochemistry course. The data we are gathering compares student perceptions in two scenarios--viewing 3D protein structures via traditional monitor display in PyMol versus in Augmented Reality using iPads. 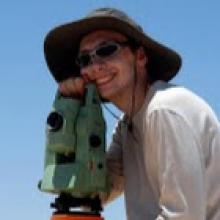 Andrew Wilson completed his PhD in the field of computer science and archaeology from the University of Liverpool, UK. He is currently serving as the Academic Technologist for Digital Scholarship with a focus on augmented and virtual reality at Carleton College, MN. His primary interests include the use of augmented and virtual reality, machine learning, and analytics within the educational field. Before taking up his position at Carleton College, Dr. Wilson worked as a faculty member of the Computer Science department at Bangor University, UK. During this time, he helped lead a significant Arts and Humanities Research Council project investigating the use of crowd-sourced data for use with cultural heritage. While based in the UK, Dr. Wilson was the co-director of a software development house, Red Dragon Softworks (RDS). RDS focused on working with commercial clients to develop large-scale custom mobile and web-based applications to their specifications. 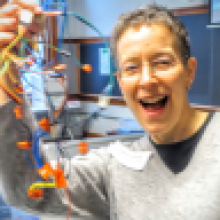 Janet is the Director of Academic Technology for Carleton College. She holds a Ph.D. in biochemistry from the Ohio State University as well as teaching certifications in biology and chemistry for grades 7-12. While she focused earlier in her career on the biochemistry of vasoactive enzymes in human skeletal muscle, work supported by the National Science Foundation and the Howard Hughes Medical Institute shifted Janet's attention away from bench science to science pedagogy and then to technology-enhanced learning. Before coming to Carleton, Janet was at Earlham College, the College of Wooster, and, most recently, at Georgetown University where she was Director of Technology Enhanced Learning at GU's Center for New Designs in Learning & Scholarship (CNDLS). Janet lives on four acres in Northfield and is still studying and practicing snow blowing patterns in the hopes of clearing her driveway.

The spatial nature of molecular representation plays a central role when understanding molecular interactions. The visually demanding nature of fields such as biochemistry, where the complexity of visual imagery used to communicate descriptions and illustrations of molecules, are particularly challenging for students [1, 2]. Students especially struggle with depictions of external representation used to convey 3D information about the relationships between molecules such as those between the macromolecules proteins and nucleic acids. As a result, educational researchers have acknowledged the critical nature of visual literacy and need for Molecular graphics tools for biochemistry understanding.

With the development of new technologies, educators have turned to visualization tools as a means to communicate structural information for complex visual imagery. Examples of these 3D visualization programs are seen in the development of Jmol, PyMol and Chimera. These software packages can be complemented by other tools such as physical models [3]. Their effectiveness, however, depends on the user's ability to interact with this software successfully--many of the software packages are quite complex themselves and require expertise that learners rarely posses. One newer technique which enables a meaningful and successful interaction even for learners is Augmented Reality (AR). AR allows for the overlaying of virtual data within a real scene. AR can offer several advantages over static 2D/3D based visual imagery, enabling more variation of interactions with the illustration such as zooming, changing position, and adapting what elements are currently visible. Moreover, newcomers to AR are quickly able to perform the manoeuvers required.

We developed an interactive AR interface and piloted it in the classroom during two upper-level biochemistry lectures. At the start of each class where the AR app was utilised, students were asked to complete a feedback form gauging their confidence in understanding and analysing 3D structures of biological molecules. During the session, the students were briefly introduced to the AR application and QR codes and then asked to utilise the app and undertake a group discussion based on their findings. Upon completing each of the required worksheets and discussions, each student was again asked to complete a feedback form.

The purpose of this study was to compare student’s level of interest in viewing 3D protein structures using two scenarios S1 (2D display in PyMol) and S2 (3D AR display using IPads). The initial findings suggest that most of the students enjoyed using the AR application and found it a beneficial way to view specific biological molecular structures.

During this session, we will have IPads available for attendees to experience the app and the molecular interactions. We will also share additional study designs and initial student feedback data and hope to get input on our future iterations from attendees.

[3] Oliver-Hoyo, M. Promotion of Spatial Skills in Chemistry and Biochemistry Education at the College Level, Journal of Chemical Education 2017; 94 (8), pp996-1006