Learn how to redesign your course into a semester-long game-show that develops students’ skills while promoting active learning and fun in the classroom. This session demonstrations how to apply the “Iron Chef” game show as an anchor to convert an existing classroom-led course to a competition-based curriculum. 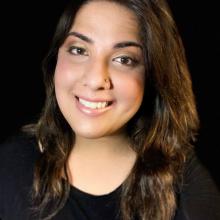 Kiran Budhrani is the associate director for personalized and adaptive learning at the Center for Teaching and Learning at the University of North Carolina at Charlotte.

Gamification is the use of game elements and game design techniques in non-game contexts to improve user engagement (Deterding, Dixon, Khaled, & Nacke, 2011). In the classroom context, gamification means adding a game layer to the course to integrate gameplay and learning, rather than developing a separate game. Using game elements can help promote active learning in the classroom.

The game layer suggested in this workshop is to use a game show format “Iron Chef” to provide a competition-based learning anchor on which the gameplay and game elements align to throughout a full semester. Game shows formats such as Jeopardy and Who Wants to be a Millionaire have been used to the practice recall factual information (Kiili, 2005), but occur as a one-time, fragmented events in a course. The game show format suggested in this workshop purposefully intends for the development of learner skills over an entire semester, spanning ten to fifteen weeks. Consequently, an expert instructional design colleague advices that when selecting a game show, choose one that students are familiar with and never invent your own game.

Game show competitions are very much fitting as an instructional design approach for technical courses. The use of competitions has been explored in the recent literature for skills-based courses in secondary and higher education such as Mathematics (Gürbüz, Erdem, & Uluat, 2014), Engineering (Ebner & Holzinger, 2007), Data Structures (Lawrence, 2004), Artificial Intelligence / Programming (Ribeiro, Ferreira, & Simões, 2009; Wallace & Margolis, 2007),  and Operating Systems (Hill, Ray, Blair, & Carver Jr, 2003). Essentially, the game show format takes over traditional classroom format of lessons and testing; the teacher becomes the game host, and students become players with tasks and rewards. The game show is run over a semester where students are “playing to learn” through accomplishing tasks, earning rewards, engaging in competition.

The game layer intends to increase learner interest, motivation, engagement, and fun to add variety to routine learning tasks. But what is not well addressed in the literature that the game layer should promote achievement of key learning outcome in the course. For example, in my Instructional Multimedia undergraduate course, gamification was utilized as an instructional strategy for sophomore college students to engage in self-study and consistent practice to develop multimedia skillset of photo-editing, sound-editing, video-editing, logo design, animation, and authoring, while having serious fun.

To gamify the classroom, teachers need to think in the frame of a game designer to define a game layer (the game format), game elements (what the player sees) and a game play (what the designer sees). Game elements include points, badges, leaderboards, and levels for the players (i.e. the students). But the game play is much more complex requiring the teacher to define the game’s learning goals, a game format, game challenges, reward systems, feedback loops, the experience of fun, and the game balance. Teachers must not only embrace the idea that learning can occur in games, but must also give up a measure of control, trusting that students can make their way through games with minimal instruction (Osterweil & Klopfer, 2011). In a game show format, the following key principles come into play: (1) there are no formal lessons, only self-study; (2) there are no tests, only challenges; (3) there are no grades, only achievements; (4) there are no failures, only feedback; and (5) there is no teaching, only learning.

The gameplay is the core of the instructional design and its significance should not be underestimated (Kiili, 2005). Gameplay creates a linked series of challenges, levels, and the actions the students as players need to complete (Rollings & Adams, 2003).  Gameplay also includes identifying reward systems and feedback loops. Integrating gameplay with reward systems requires that the teacher finding the right balance, so that the primary factor in the success of the player is their skill level (Kiili, 2005) over the possibility of winning by random chance. Gamification as an instructional strategy can pitfall to “pointsification” or the collection of achievement points, while it should be targeted towards improving skills and performance of students. Thus, rewards, badges, and feedback loops need to be timely, not only to keep the game fun and engaging, but are also necessary to support low performing players to catch up and continue playing the game. Badges need to merit student participation and effort, as well as student achievement to maintain balance. Game challenges should be balanced so that the game's difficulty is scaffolded from simple-complex. There should be conscious effort on the teacher to strike an easy-hard balance to ensure the player can manage their time to self-study, practice, prepare for game challenges outside of class, and come in class to “play well” and “win”.