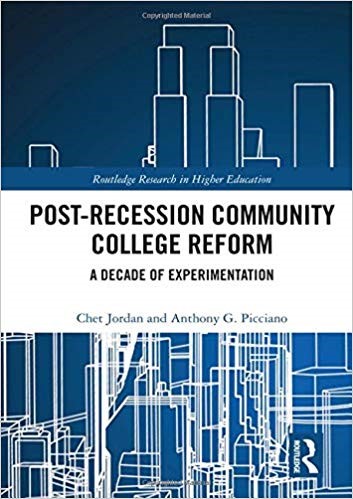 Here is what two colleagues who reviewed our book had to say:

“In a time when the value and structure of community college are simultaneously questioned and offered as a solution to workforce and societal needs, Jordan and Picciano’s volume breaks new ground in the study of community colleges.  By shedding light on what has happened in the community college environment since the recession, they give us a wealth of ideas to think about regarding future opportunities.”

“Picciano and Jordan explore the transformational work taking place across our nation’s Community Colleges. The authors have compiled a review fueled and steeped in the kind of data, narrative, and storytelling that posits more than documenting post-secondary shifts, but have created a compendium that will spark further discussion about educating our citizenry for success.”

Below, I’ve provided an overview of the book, excerpts from two chapters that may be of particular interest to the OLC community, and a full chapter listing.

As a result of the economic downturn in the early 21st Century, an already eroding financial base for public higher education saw even further losses.  At the same time, enrollments were booming, particularly in the two-year sector where many students who would have traditionally forgone a college education were now enrolling to be competitive in a harsh labor market.  New accountability measures were imposed across the states and through policy initiatives launched by the Obama administration.  Incredibly low two-year college graduation rates coupled with soaring costs of providing specialized instruction and remedial education became a source of focus for education policymakers and university administrators.  In recent years, enrollments in the community colleges have decreased; in some states, they have plummeted.  Hoping to reduce the impact of the loss of students and improve their overall programs, a number of colleges and universities shifted their academic priorities to experimentation and reform—hoping to raise graduation rates, provide further access to underrepresented groups, and reduce the overhead cost of instruction.  The purpose of this book is to analyze and evaluate several key community college reform programs that emerged after the Great Recession. Major initiatives in California, New York, Tennessee, Florida, Connecticut and Wisconsin serve as the basis for this analysis and evaluation. This book examines the development and implementation of these initiatives and document relevant commonalities, challenges, and successful components of the reform programs.

“In California…after the Great Recession of 2008-2009, headcount enrollments in its community colleges dropped from a high of 2,927,670 in 2008 to 2,292,351 by 2012, a decrease of more than 635,000 students.  During this period, students were put on wait lists for community college admission and course sections were dramatically reduced so that many students could not get the credits or courses they needed to graduate.  It was in the midst of this forced enrollment decline that a new Online Education Initiative (OEI) commenced in December 2013 to provide a viable alternative to traditional face-to-face courses in order to serve students seeking a community college education.”

“In October 2017,  University of Wisconsin (UW) President Ray Cross proposed restructuring of its thirteen community colleges.  His proposal called for the merger of all  UW community colleges with seven geographically-close four-year UW institutions as of July 1, 2018.  The restructuring proposal came before the Board of Regents in November and was approved. During the Board deliberations, Cross was quoted as commenting:

‘The facts will not change, regardless of how long we study them.  Doing nothing is not an option.  The only other choices are closing campuses, merging with the technical colleges, or integrating UW Colleges and UW-Extension into our existing structure.’

Under this plan, no physical campuses would be closed, with the two-year campuses instead functioning as branch campuses of the four-year colleges.”

If you are at all interested in the state of the American community college, you will find this book a valuable read.  Any feedback is welcome! Email me at research@onlinelearning-c.org.

Advancing online education begins with you. Help shape the future of online, digital, and blended learning at OLC Innovate 2022.