Offered through University College, MTSU Online courses began in fall 1997 with seven classes and 53 student enrollments. It has grown tremendously since to now offer over 400 courses while achieving a record 10,000-plus enrollments for this fall and more than 21,000 enrollments annually. 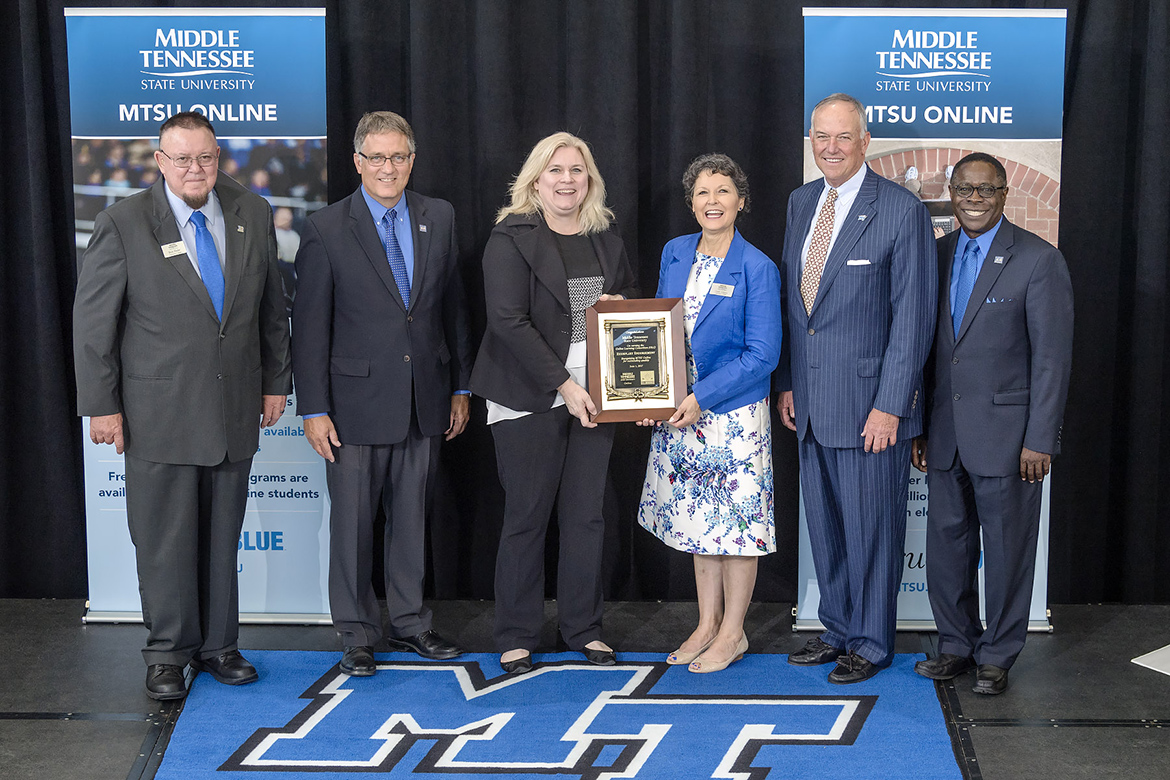 “I am extremely proud of the steady and remarkable growth and progress of MTSU Online and I am very mindful of the important role it has played in our development as a major, comprehensive university,” MTSU President Sidney A. McPhee told the crowd gathered in the atrium of the Miller Education Center on Bell Street where University College is based.

The not-for-profit Online Learning Consortium, which assesses the quality of online educational programs around the world, formally presented the university with its Exemplary Endorsement plaque recognizing MTSU Online for “outstanding quality.” Announced earlier this year, the designation stems from a comprehensive scorecard developed by OLC to assess the quality of online educational programs.

MTSU is the only Tennessee university to have received this designation.

In presenting the award, Jennifer Mathes, director of strategic partnerships for the Online Learning Consortium, said the endorsement “reflects an institution’s commitment to provide a quality learning environment for their students, because it’s all about the students. … You should be proud of this achievement at MTSU.”

McPhee noted that nationwide, nearly one third of all college students take at least one online course and that two-thirds of those online learners are at public institutions like MTSU. Online course delivery allowed MTSU to develop its Adult Degree Completion Program 10 years ago to the largest such program in the state today, offering the needed flexibility for working adults seeking their degrees.

“Our institution was one of the few universities that recognized early the amazing potential and game-changing influence that online delivery would have on higher education,” McPhee said, pointing out that the age of MTSU Online Learners ranges from 17 to 82 years old. One of those students enrolled during the past two decades was MTSU Board of Trustees Chairman Steve Smith, who spoke at Monday’s celebration. The Blue Raider Sports Hall of Fame member studied finance during his baseball playing days of the 1970s, but left before getting his degree. He earned his bachelor’s degree in liberal studies in 2011 through MTSU Online, recalling how he “earned credits at night, on weekends, on business trips, in between meetings and whenever I could find time to get the job done.”

“Only a handful of people knew I was trying to earn my degree,” he said. “I didn’t want to draw attention to myself, or make a big deal out of the fact that I had again become a college student. MTSU Online allowed me to work at a comfortable pace and in a way that best suited my needs.

“So, this is a fact: If not for the MTSU Online program, it’s doubtful I would have been able to finish my studies and earn my degree.”

Smith gave special thanks Dianna Rust, an associate professor in University College who played a key role in the early development of MTSU Online. Speaking at Monday’s celebration, Rust praised the work of all of those involved with starting and building MTSU’s online program, particularly the online faculty “who are the backbone of our program,” she said.

She also recognized faculty mentors, department chairs, student support services personnel, technical support staff, as well as those who did the legwork required to obtained the Online Learning Consortium recognition.