Campus Technology | January 22, 2018 - According to the Babson Survey Research Group's latest annual report on distance education in the United States, online student enrollment has grown for the 14th year in a row. Nearly a million additional students took distance education courses in 2016 compared to 2012, a count consisting of both people who took online classes (or other forms of distance ed) exclusively as well as those who took a mix of online and face-to-face courses. That translates to more than 30 percent of colleges students — 6.4 million in total — who took at least one distance education course during the 2015-2016 academic year.

Conversely, a million fewer students came to campus for their college education in 2016 than in 2012. 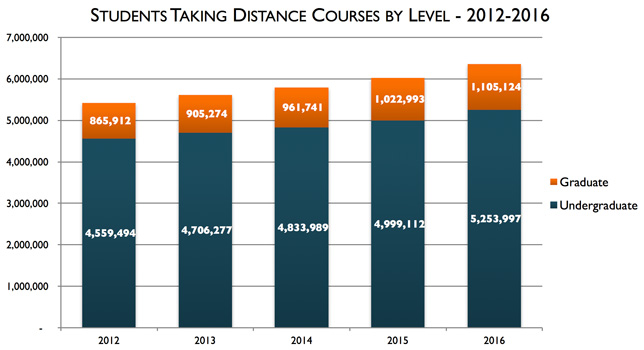 The same report, which is jammed with 49 pages of information about the online segment, shared these findings as well:

The Babson research operation works out of Babson College. The report was sponsored by Pearson, the Online Learning Consortium and Tyton Partners. The complete report, "Great Increase: Tracking Distance Education in the United States," is available for registration on the research group's website.