Prospective online students are drawn to local schools and are skewing younger, one report discovers.

Prospective online students are skewing younger, tend to enroll in local institutions and put a program's cost and reputation at the top of their priority list, according to a recent survey.

Those and other findings are outlined in "Online College Students," a July report by Aslanian Market Research and the Learning House, a company that helps colleges ​and universities improve their online degree programs. The report, in its fourth year, surveyed about​ 1,500 graduate and undergraduate students enrolled, recently enrolled or about to be enrolled in online programs in spring 2015. 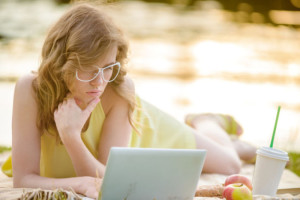 Adults put cost at the top of their priority list when choosing an online program, according to one report.

Among the most surprising findings in the report, authors say, is the shifting age of online students. While distance education students are often assumed to be older, the report found the popularity of online undergraduate programs is growing among those under 25.

Thirty-four percent of undergraduate online students were under the age of 25 this spring,​ up from 25 percent in 2012, according to the report.

The percentage of online graduate students under 25 also grew, jumping from 13 percent in 2012 to 19 percent this year.​ Authors say these changes could be due to two factors: the economic pressure to work while going to school and increasing familiarity with online courses.

Students "have had online courses in their background because many high schools now require an online course," says study author Carol Aslanian, senior vice president of Aslanian Market Research. "If they have started college and are going back, many colleges have them. They are going to be groomed to appreciate it."

That's not too surprising to Joel Hartman, vice provost for​ ​information technologies and resources at the University of Central Florida, who says most universities successfully recruit online students within the geographic areas they serve.

"We do very well," says Hartman, who also serves as chief information officer. ​"It's how we got to have 38 percent of our credit hours generated online."

When it comes to choosing an online program, the report found that prospective students put cost at the top of their priority list. Forty-five percent of respondents said they selected the most inexpensive institution out of their options, up from 30 percent the year before.

Two-thirds of students did not receive a scholarship when they enrolled in their online program.

[Find out how to decipher the true cost of your online degree.]

Reputation was the second most important decision-making factor after cost, although a significant percentage of students also considered whether the institution was recognized as high quality, the number of hours required for study each week and whether ​there were set ​class meeting times.

But more women are in higher education in general, ​Aslanian says. Women represented ​56 percent of undergraduates in fall 2013 and 59 percent of graduate students, according to a May 2015 report ​by the National Center for Education Statistics. ​

The percentage of female online students could also be the result of the kind of careers women pursue, Aslanian says.

"A lot of the professions for which you need further education – health, social services, education – they are dominated by women," she says. "Many men may go into business and on their own. The women-oriented employment fields require more education."

While the report highlights various trends in student preferences, Clinefelter is quick to point out that online students are split on many issues, from how often they would like to engage with a faculty member to their tolerance for synchronous, or live, courses.

[Determine whether your online program is accredited.]

While it's easy to stereotype, he says, "these students are not all alike in a variety of ways."