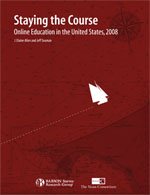 2008 - Staying The Course - Online Education in the United States

2008 - Staying The Course - Online Education in the United States

Staying the Course: Online Education in the United States, 2008 represents the sixth annual report on the state of online learning in U.S. higher education. This year’s study, like those for the previous five years, is aimed at answering some of the fundamental questions about the nature and extent of online education. A collaborative effort between the Babson Survey Research Group, the College Board and the Sloan Consortium and supported by the Alfred P. Sloan Foundation the study is based on responses from more than 2,500 colleges and universities, addressing the following key questions:

How Many Students are Learning Online?

What is Impact of the Economy on Online Enrollments?

Background: Bad economic times have often been good for education, either because decreased availability of good jobs encourages more people to seek education instead, or because those currently employed seek to improve their chances for advancement by advancing their education.
The evidence: Institutions believe that the economic changes will have a positive impact on overall enrollments and that specific aspects of an economic downturn resonate closely with increasing demand for online courses with specific types of schools.

Do Academic Leaders and Faculty Agree?

Background: Chief academic officers have important decision making powers for institutions of higher education, and they often make their decisions based on their understanding of faculty opinions. Do these academic leaders have a good understanding of faculty views?
The evidence: A series of questions about motivations for teaching online was asked of a sample of faculty who teach online and of chief academic officers. There was a wide level of agreement, with one important difference.

Background: For online education to continue its rapid growth, it must be perceived as important by the chief academic officers who are planning tomorrow’s educational offerings. Only if these academic leaders believe that online is critical will they build future programs around it.
The evidence: Results for the previous five years have shown an increase followed by a leveling in the proportion of those institutions stating that online education is critical to their long term strategy.

What Disciplines are Best Represented Online?

Background: Online enrollments have shown substantial growth for each of the past five years. Has this extraordinary growth been uniform across all areas of higher education or concentrated among specific institutions or specific types of programs?
The evidence: Online enrollments have seen steady growth, as has the number of institutions with online program offerings. What is not known, however, is if particular disciplines are better suited to online and others less well suited.