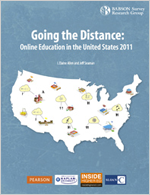 2011 - Going the Distance: Online Education in the United States

2011 - Going the Distance: Online Education in the United States

The ninth annual survey, a collaborative effort between the Babson Survey Research Group and the College Board, is the leading barometer of online learning in the United States.

The complete survey report, "Going the Distance: Online Education in the United States, 2011", is based on responses from over 2,500 academic leaders.

"The rate of growth in online enrollments is ten times that of the rate in all higher education" said study co-author I Elaine Allen, Co-Director of the Babson Survey Research Group and Professor of Statistics & Entrepreneurship at Babson College. "While growth rates have declined somewhat from previous years, we see no evidence that a dramatic slowdown in online enrollments is on the horizon."

"There is a wide variety in rate of growth of online enrollments among different colleges and universities, and also among different programs within the same institution. For example, fully online health sciences programs show higher growth than online programs in other disciplines."

Previously underwritten by the Alfred P. Sloan Foundation, the report has been able to remain independent through the generous support of Pearson, Kaplan University, Inside Higher Ed and the Sloan Consortium. As a result of the partnership with Pearson the free distribution of the report this year will for the first time include an option for an eBook version.