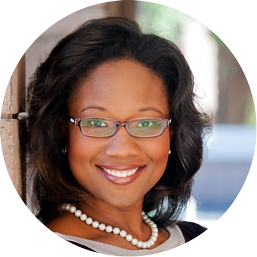 Colleges and universities are increasingly employing data analytics and online learning to leverage student success. Administrators, staff, and faculty frequently make tough decisions that can have an incredible impact on our student’s lives. But, what data should our campus community have access to in order to transform learning? And how can data be used effectively to shape the student experience, whether at community colleges, private liberal arts, public or research universities? As the higher education and online learning community evolve, we can shift our culture to better meet the needs of our students by incorporating data-driven strategies for success.

A host of the PBS series, NOVA Wonders, Dr. Talithia Williams is a groundbreaking professor, popular TED speaker, inspiring author and passionate STEM/STEAM advocate. She has made it her life’s work to get people of all ages and backgrounds excited about the bold possibilities of a STEM education and to “STEMpower” women and minorities to enter these professions. Her latest book, Power in Numbers: The Rebel Women of Mathematics reflects Williams’ passion to re-brand the field of mathematics as anything but dry, technical or maledominated. Renowned for her popular TED Talk, “Own Your Body’s Data,” she advocates for all of us to deploy data as a way of taking charge of our own health. A vibrant, engaging and energizing speaker, Dr. Williams demystifies data, statistics, probabilities and the mathematical process in amusing and insightful ways. She also passionately champions the contributions of scientists, technologists, engineers and mathematicians and their vital role in transforming our future.

Dr. Williams is Associate Dean for Research and Experiential Learning and Associate Professor of Mathematics at Harvey Mudd College, where she develops statistical models which emphasize the spatial and temporal structure of data, and applies them to real world problems. Focused on data analytics, mathematics, statistical modeling and STEM Outreach, she is the first African-American woman to achieve tenure at the college. She hosts NOVA Wonders, a PBS mini-series that explores the biggest questions on the frontiers of science. The Los Angeles Times praised the show for sending the message “that scientists come in a range of ages, genders, colors and hairstyles.” She also appeared in NOVA’s Prediction by the Numbers, a series exploring the history of probabilities and gambling which Forbes called, “an entertaining, fun piece that conveys her knowledgeable and deep interest in this predictive method.” In addition to her teaching and television work, she has partnered with the World Health Organization in developing a cataract model used to predict the cataract surgical rate for countries in Africa. Her professional experiences include research appointments at NASA’s Jet Propulsion Laboratory, NASA’s Johnson Space Center, and the National Security Agency.

An exceptional communicator and gifted teacher, Dr. Williams won the Mathematical Association of America’s Henry L. Alder Award for distinguished teaching. She also developed a 24-part college level lecture series on learning statistics for The Great Courses, an online platform for lifelong learners. Dr. Williams earned a bachelor’s degree in mathematics from Spelman College, a master’s degree in mathematics from Howard University and a Ph.D. in statistics from Rice University.

Described by audiences as engaging, relevant, funny, accessible, and a joy to work with, Dr. Williams captivates and inspires with her contagious enthusiasm for STEM in general and math in particular. Applying the data-driven approach made famous in her TED talk to a range of subjects, she takes sophisticated numerical concepts and makes them understandable to a wide audience, debunking perceptions with an energizing call to “show me the data!”