Online Nation: Five Years of Growth in Online Learning represents the fifth annual report on the state of online learning in U.S. higher education. This year’s study, like those for the previous four years, is aimed at answering some of the fundamental questions about the nature and extent of online education. Supported by the Alfred P. Sloan Foundation and based on responses from more than 2,500 colleges and universities, the study addresses the following key questions:

How Many Students are Learning Online? 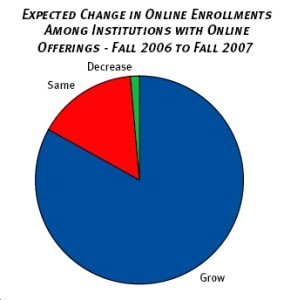 Where has the Growth in Online Learning Occurred?

Why do Institutions Provide Online Offerings?

Background: The growth of online enrollments has been abundantly clear. Less clear, however, is why colleges and universities are moving to online. What specific objectives do they hope to achieve through their online courses and programs?
The evidence: Improving student access is the most often cited objective for online courses and programs. Cost reduction is not seen as important.

What are the Prospects for Future Online Enrollment Growth?

Background: Compound annual enrollment growth rates of over twenty percent are not sustainable. The demand for online among potential students is finite, as is the ability of institutions to grow existing offerings or add new ones. Where can we expect the additional growth to occur?
The evidence: Approximately one-third of higher education institutions account for three-quarters of all online enrolments. Future growth will come predominately from these and similar institutions as they add new programs and grow existing ones.

What are the Barriers to Widespread Adoption of Online Education?

Background: Previous studies in this series have shown that academic leaders have consistently commented that their faculty often do not accept the value of online learning and that it takes more time and effort to teach an online course. To what extent do these leaders see these and other issues as critical barriers to the widespread adoption of online learning?
The evidence: Identification of the most important barriers differs widely between those with online offerings and those who do not offer any. Current results replicate our previous studies in identifying faculty acceptance and the need for more discipline on the part of students as the most common concerns.