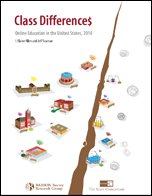 The 2010 Sloan Survey of Online Learning reveals that enrollment rose by almost one million students from a year earlier. The survey of more than 2,500 colleges and universities nationwide finds approximately 5.6 million students were enrolled in at least one online course in fall 2009, the most recent term for which figures are available.

“This represents the largest ever year-to-year increase in the number of students studying online,” said study co-author I Elaine Allen, Co-Director of the Babson Survey Research Group and Professor of Statistics & Entrepreneurship at Babson College. “Nearly thirty percent of all college and university students now take at least one course online.”  She adds:

"There may be some clouds on the horizon.  While the sluggish economy continues to drive enrollment growth, large public institutions are feeling budget pressure and competition from the for-profit sector institutions.  In addition, the for-profit schools worry new federal rules on financial aid and student recruiting may have a negative impact on enrollments.”

The eighth annual survey, a collaborative effort between the Babson Survey Research Group and the College Board, is the leading barometer of online learning in the United States.  The survey is funded by the Alfred P. Sloan Foundation and distributed by the Sloan Consortium.