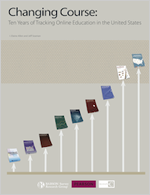 Changing Course: Ten Years of Tracking Online Education in the United States, the tenth annual survey, a collaborative effort between the Babson Survey Research Group and the College Board, is the leading barometer of online learning in the United States.

The complete survey report, "Changing Course: Ten Years of Tracking Online Education in the United States", is based on responses from over 2,800 academic leaders.

The 2012 Survey of Online Learning reveals that the number of students taking at least one online course has now surpassed 6.7 million. Higher education adoption of Massive Open Online Courses remains low, with most institutions still on the sidelines.

"Institutional opinions on MOOCs are mixed, with positive views of their ability to learn about online pedagogy and to attract new students, but concerns about whether they represent a sustainable method for offering courses," stated his co-author I. Elaine Allen.

Previously underwritten by the Alfred P. Sloan Foundation, the report has been able to remain independent through the generous support of Pearson and the Sloan Consortium.