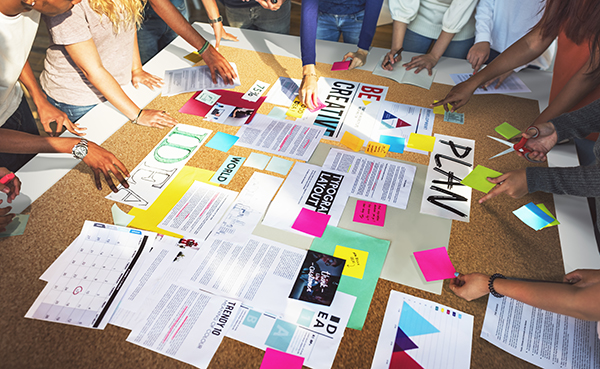 “Submit your initial post (minimum 200 words/maximum 300 words) by Wednesday night at midnight. Respond to two of your peers (minimum of 75 words) by Friday at midnight. Make sure you cite references supporting your post using APA style.”

If you have ever taught online, the directions above are likely recognizable to you as boilerplate language that is often used to assign work in the online discussion forum.  You’ve seen it a thousand times. Probably used some variation of these directions yourself. If you stop and think about it though, is there anything that feels remotely conversational to you about the process outlined above? Really. If you truly think about it, does this prescribed post, read, post, repeat rhythm feel anything like a discussion? Is it fair to call it a discussion–or is what we are asking students to do more like writing a series of mini-essays? If that’s the case, where is the engagement happening in an online course with this type of discussion?

This is the very question that we spontaneously ended up exploring by chance one spring morning. We, Melissa (the faculty member teaching the course that summer) and Jill (the instructional designer helping to redesign some of the assignments before the next term), were huddled over our laptops in Melissa’s office, sipping coffee, reviewing rubrics and rewriting directions for UDL: A Framework for Teaching and Learning. Suddenly, Melissa burst out in frustration, “You know this course just works so much better in the classroom! I feel like my students in the face-to-face version simply have a better learning experience.” As you may know, this isn’t the type of thing you can say around an instructional designer if you would rather not get into a conversation about course design, so naturally Jill responded, “Melissa, why do you think that is? What’s different? Maybe we can take a look at what is working better in the face-to-face version and adjust the online course to make it work better?”

And so it began. This simple interaction launched us into an involved talk about exactly how the face-to face and online versions of the courses differed. We quickly zeroed in on the vast differences in how “discussion” functioned in each offering. We discovered that in the classroom version, students would briefly break up into small groups each week to share and provide feedback to one another on the lesson plans they were individually developing. It didn’t feel like a major element of the face-to-face course design–it was so easy to do. In the online course, without the benefit of being able to break up into groups without any planning and have discussions synchronously, the discussion defaulted to a fairly typical approach that you see in many online courses–students instead interacted by posting their answers, ideas and reactions to questions posed that were based primarily on the assigned readings. After talking it through, what was hidden before suddenly became glaringly obvious. The way students were “discussing” in the online course lacked crucial elements that were benefiting students in the face-to-face version of the course.

What next? What do we do with this realization? We decided that the best way to take a closer look at exactly how the versions differed was to put pen to paper to do an intentional reflection about how “discussion” was used in each modality of this particular course. Specifically, we created a chart in which we compared targeted areas: how students were interacting, how discussion was being assessed, how community was being built, the types of discussions that were taking place, and the sizes of the groups. You can see what we came up with below:

After completing our reflection, we took the information we recorded, what we were informally hearing from students, and what we knew from our own experiences and came up with the following basic challenges with the way the discussion was designed in the online course.

What next? Now we were feeling a little overwhelmed. With so many identified challenges, where to start? Ultimately, we decided that trying something was certainly better than doing nothing at all. So, we dove in by making a few key adjustments to the online course that we hoped would bring the online student experience closer to what had proved to be beneficial for face-to-face students.

Next, we ran the course with the changes. We wanted to know if the adjustments we made had an impact, so we used a short survey to collect feedback from the students at the end of the course. We also set aside time to interview the instructor to learn about her experience.

What Did We Find?

What we found was a very positive response overall–from both the instructor and students. The instructor shared that grading once at the end, rather than each week, worked well and the peer grading process seemed to encourage more engagement, presumably due to a higher sense of accountability to one another. Interestingly, seeing other groups’ threads also proved to be very beneficial. Students responded very positively to the peer evaluations because it allowed them to let the instructor know not only when someone underperformed, but also when a peer performed exceptionally well. As a group, students expressed that the discussions organized in the small group format were much easier to manage, gave more purpose and productivity to the overall course, helped them to build relationships and feel much more connected to their peers and the dialogue. They also appreciated that they were getting constant, constructive feedback from both the instructor and their peers in their small groups. However, one drawback to the approach was identified–when a student is not active in his or her small group, the student’s lack of engagement can disproportionately affect the learning experience of the other students in that small group.

What Does the Research Say?

After trying this modified approach based on what we had experienced ourselves, we wanted to see what information research may provide regarding these techniques. Was there established evidence to support what we had found? The short answer is yes. Though this is just a brief summary, some important take-aways are as follows:

Being busy does not equal engagement. Clarke and Kinne (2012) found that students do not equate participation in online discussion groups to feelings of engagement. In their work, they found that instructors often inaccurately felt that because students were posting within the discussion board it meant they must be feeling engaged in the material. Conversely, they found that when students could be more self-directed in their discussion topics, they reported feeling more positive regarding their engagement.

Higher quantity of interactions does not necessarily result in critical thinking.  Rather than simply requiring more interactions, Pittaway and Moss (2014) and Dunn and Rakes (2011) stress the importance of students actively taking responsibility for their own learning and found that setting high standards for student engagement leads to greater knowledge, understanding and critical thinking.

Social engagement, intellectual engagement and professional engagement are highly correlated. Studies found that the level at which students interacted with classmates and instructors within the online learning environment was highly correlated with the level of student satisfaction and perceived learning in the class. By examining these concepts through the theoretical lens of Social Learning Theory (Bandura, 1977), social engagement is an important aspect of learning because it exposes students to other ways of interpreting, deepening, and extending their own beliefs about the course content (Beachboard, Beachboard, Li & Adkinson, 2011; Reason, Terenzini & Domingo, 2006).

Reviewing the research made it clear why we needed to change the original format of the online discussions. We discovered that how to take what we had learned and apply it to the design of other courses would take some additional work.

How Will this Approach Work in Other Courses?

Will this design approach work the same way for discussion in every course? Unfortunately, no. If only it were so easy! In this course, each student was continuing to build and improve upon on an ongoing individual course project–a lesson plan. Small group discussion was centered around providing feedback each week on each other’s lesson plans. Clearly, this is not a one-size-fits-all approach that would work in exactly the same way for all course designs.

What we realized is transferable across courses, however, is the intentional reflection process itself. In our situation, we created a simple worksheet with targeted areas related to discussion that we could examine and compare more closely. Going through this exercise helped us to remove the Learning Management System (LMS) and the technology and the templates and the logistical challenges and what is usually done in online courses from our thinking and focus solely on what students were actually doing in each version of the course. From there, we were able to see more clearly what was working well in the classroom and then begin to conceptualize how we might use the same strategy in an online offering. It helped us to see the online design in a brand-new light and instead of ask questions about what is usually done online, shift our thinking to what might be possible online.

You are welcome to download a blank version of the worksheet we created for your own use. Keep in mind that this worksheet is just a starting point–while we haven’t done it ourselves, we don’t see any reason why this approach couldn’t be customized to meet the needs of whatever issue you are trying to better understand. Just make sure you reach out to let us know how it turns out!

One Response to “Bring Meaning to Online Discussion with Intentional Design”