The OLC Innovate Conference (previously named et4online) is embedded in two stories that were turning points in my career, both of them virtual experiences. And so it seemed serendipitous that the year OLC Innovate goes fully online, that I would be invited to keynote the conference. It’s not for a happy reason that OLC Innovate went online, and I wish there wasn’t a pandemic keeping us all apart from our loved ones and our colleagues, but it is also comforting when communities such as OLC convert events online, and I have been grateful for the free OLC Ideate event (in which I am co-facilitating a session on caring for students, May 1st) and many others.

But back to my two stories…

In 2014, I took a faculty position at the Center for Learning and Teaching at the American University in Cairo. I had been working there since 2003, and my boss told me that something important had changed as I moved into my faculty position. I had to start having an international presence.

This posed a huge obstacle for me. I had a young child (two years old at the time) and traveling without her for more than one day was inconceivable to me as a mother, while taking her with me required huge logistical and financial investments I could not continually ask my family to make.

I was already finding ways to build my Personal Learning Network online, following hashtags and communities such as #DigPed which is connected to the journal Hybrid Pedagogy, and #rhizo14, my first connectivist/rhizomatic MOOC. Being present on Twitter, however, was not traditionally understandable to my colleagues. It was a parallel universe of digital social and cultural capital.

I remember making the choice to participate in OLC’s (at the time still called Sloan-C) #et4online conference in 2014 virtually. I was excited. I took days off from work and asked my mom to babysit my kid while I was “at the conference”. I had a hugely visible public interaction with Jim Groom on Twitter. It started with me tweeting to him “Looking forward to following your workshop and keynote from Cairo, Egypt” and ended with everyone watching us navigate through the early stages of Reclaim Hosting as I tested it before the event (see Jim’s blogpost, my blogpost with a few extra laughs over my embarrassing choice of title, and our initial tweets below). 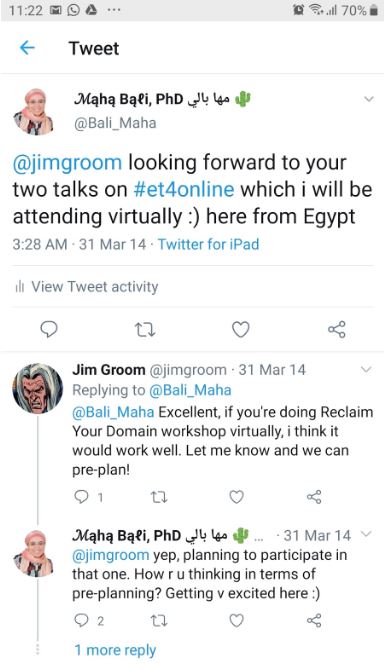 I tweeted a lot during the conference and folks like Jesse Stommel and Sean Michael Morris told me it felt like I was at the conference. Jim Groom and my friend Rebecca Hogue were presenting and they mentioned me by name and spoke directly to me as a virtual participant – something quite rare. It felt good, I felt “seen” and “heard” by people at the event who knew me from Twitter,  and it helped me become more visible. I even won “Top virtual participant” at the conference, and it was such an honor! It was a turning point in my career, how I could build social capital online during a more traditional event (a face-to-face conference).

The next year, Michelle Pacansky-Brock was chairing #et4online and invited me to participate in the organizing committee. I was so excited and honored. It was a first for me! I tried so hard that year to make it in person to the conference, but my child was still young, the conference couldn’t arrange daycare, and the opportunity cost for my family made it impossible. I was frustrated, because I was missing out on the social interactions with friends at the event. I didn’t mind doing my sessions virtually or attending others’ sessions virtually. I was used to it. But I missed the social part that happens outside the sessions the most.

The birth of Virtually Connecting

The biggest turning point in my career was when my friend Rebecca Hogue, whom I had met via #rhizo14, offered to be my “buddy” onsite and connect me to others at the conference via her device. We thought about it some more, and since I was the virtual unconference co-chair with Jesse Stommel, Rebecca and I decided to make this experience of connecting to people onsite something that we would open up for others to join into, and we livestreamed it to YouTube. We worked it out with OLC and the organizing committee, and we learned how to make Google Hangouts on Air work for us, and we announced it on our blogs and the OLC website. That conference was the best virtual conference experience for me ever.

Coincidentally, so many of my friends were at the conference and so many were willing to make the time to meet me, including keynote speakers that year: Bonnie Stewart, Mimi Ito and Gardner Campbell. We also met with other wonderful people like Jesse Stommel, Sean Michael Morris, Whitney Kilgore, Amy Collier, Laura Gogia, Michael Berman and many more – you can see the playlist here. Alan Levine followed virtually one day and then joined us onsite the next. Many people were joining us virtually and watching the livestream and Tweeting to cheer us on. Later, Michael Berman wrote that Rebecca and I had “virtualized the right part of the conference” and Suzan Koseoglu wrote about the value to her as a graduate student at the time, “here I was talking to somebody influential in the field, asking some basic questions and getting answers”. See Rebecca’s and my post right after the event here.

#et4buddy was the pilot or seed for what later became Virtually Connecting, a grassroots movement that organizes hybrid hallway conversations at conferences for virtual participants who would not otherwise have access to them. We eventually realized that there were many people who were continuously excluded from academic conferences for a variety of reasons, and we sought to not only enhance their virtual experiences, but to amplify their voices at conferences.

I will always remember the day after et4online when I met with Rebecca and Whitney Kilgore (online of course!) and Whitney encouraged us to expand  #et4buddy into what soon after became Virtually Connecting. Some people were doubtful this setup would work beyond a Rebecca/Maha partnership, but so many people volunteered and so many people were interested, and our community grew. It was not so much that my friendship with Rebecca was not central to this experience. It totally was. But there were many people willing to get closer to each other in order to make something like this happen, and the community grew.

When Autumm Caines joined our team, she helped us develop processes that enabled us to expand and invite more volunteers to join our team, and she managed a team of virtual buddies when Rebecca and I met in person for the first time at the ALT conference in September 2015 in the UK. Autumm eventually joined Rebecca and me as a co-director, and we celebrated our one year anniversary at OLC Innovate 2016.

Since 2015, we have organized Virtually Connecting sessions at conferences all over the world, from Australia to South Africa to Cairo to Kyrgyzstan to Italy to UK to all over North America. We have 5 co-directors and multiple regional leads because it became difficult to organize everything centrally. Our ethos is built on what we call Intentionally Equitable Hospitality, where we focus on redressing injustices and recentering marginalized voices in the ways we can, even knowing that we will always fall short.

My daughter is older now, and I have keynoted several events in person, including OER17 in the UK, Digital Pedagogy Lab in the US and more. But it is still difficult for me to travel often, and I have been opting to conduct most of my keynotes virtually, and following them up with Virtually Connecting sessions where possible. I know from many experiences that virtual keynotes often work better with a fully online audience, and so I look forward to keynoting OLC Innovate this year, in these circumstances.

Now that much of the world has had to move to emergency remote/online learning because of the pandemic, those of us who have been working online for two decades have been swamped with trying to help make this transition work, many of us with an ethos of care and social justice at the forefront. In my keynote, I hope to highlight some of these dimensions, and reflect on this experience, with a look towards an uncertain future.

Stay safe, and take care of yourself and your loved ones. And I’ll see you inshallah in June. Although… you know… I can see you on Twitter before then! Learn more about OLC Innovate and Maha Bali’s keynote.