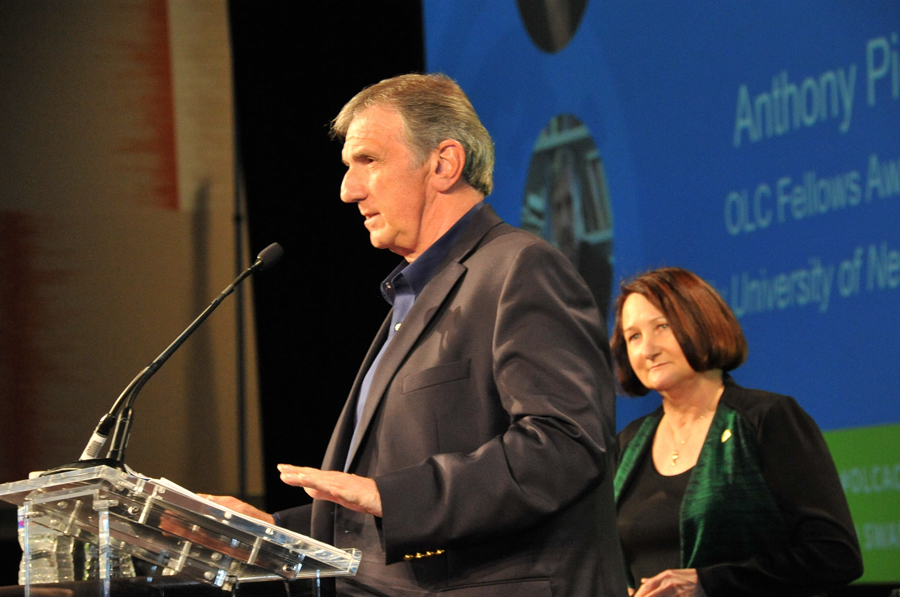 As we approach the 25th Anniversary of OLC’s Accelerate Conference, it is a good time to look back and consider how Sloan-C/OLC got its start. We can begin with the concept of digital learning which predates the Internet and the World Wide Web by decades. Instructional software packages designed to be used on large mainframe computers and distributed via digital communications technology were in existence since the late 1950s. Computer-assisted instructional programs (CAI) developed by B.F. Skinner and Pat Suppes started a small but important movement of a CAI model for delivering instruction. Later, in the 1980s, Roxanne Hiltz and Murray Turoff at the New Jersey Institute of Technology started experimenting with virtual learning that went beyond CAI and allowed for a level of interactivity among students and faculty. These virtual systems planted the seeds for one of the most significant developments in delivering instruction in the 20th century, referred to initially as an asynchronous learning network (ALN) and later as online learning.

Ralph Gomory, President of the Alfred P. Sloan Foundation, promoted the ALN concept in 1992 by establishing the Learning Outside the Classroom grant program, later known as the Anytime, Anyplace Learning Program. The purpose of the program was to explore educational alternatives for people who wanted to pursue higher education but who could not easily attend regularly scheduled college classes. This exploration resulted in the promulgation of a pedagogical practice commonly referred to as an asynchronous learning network or ALN. Using modern data communications technology, including the Internet and World Wide Web, ALNs allowed teaching and learning to transcend time and space in order to provide access to a quality higher education. Gomory envisioned students learning in their homes, places of business or just about anywhere they could connect to a digital network. Joel Hartman, Vice Provost for Information Technologies and Resources at the University of Central Florida, commented that “Dr. Ralph Gomory and the Foundation were way ahead of their time in promoting digital teaching and learning especially considering that the Internet as we know it did not exist.” The vast majority of households in the United States did not have connections to digital networks and at that time no one was predicting that within a decade the populace would be willing to pay for high-speed communications lines to use the vast information resources of the Internet including access to online courses and degrees.

Frank Mayadas, a Program Director at the Sloan Foundation, believed that if the ALN program was to expand and reach large student populations, Sloan needed to direct grant resources to academic programs at the large public university systems. As a result, public universities in Illinois, Pennsylvania, Massachusetts, Maryland and New York were awarded major grants in the mid and late 1990s to develop and promote online learning. Eric Fredericksen (formerly of the SUNY Learning Network and now Associate Vice Provost at the University of Rochester) described a three-phase progression beginning with small proof of concept projects, onto larger university-wide proof of scale projects, and finally to full expansion and proof of sustainability projects. The smaller initial projects brought in “early-adopter” faculty and administrators who formed a “grassroots” base of individuals willing to support the larger, system-wide effort. The larger system-wide efforts brought ALN to scale and the grassroots base that supported these efforts gave credence to the overall scaling-up of ALN and avoided the appearance and/or reality of top-down directives. The result was that before the end of the millennium, online learning was making deep inroads into higher education. Perhaps the most startling aspect of the growth of online learning was that it was no longer viewed as an aspect of distance learning but that it had entered the mainstream of higher education providing access to a host of student populations. In addition to those students who lived far away from a college campus, students leading busy lives in urban areas appreciated the convenience of taking online courses in their homes. Students living in college dormitories enrolled in online courses because they enjoyed learning with technology, and corporate trainers looked upon online learning as a less expensive way to provide staff development to employees.

In 1995, the Sloan Foundation funded a meeting of Anytime/Anyplace grant recipients in Philadelphia to discuss what was being learned as a result of early ALN activity. This was an important step mainly because there were no outlets or organizations that were monitoring online learning. This meeting became an annual event that moved from Philadelphia to New York and then to College Park, Maryland. These early meetings were small affairs with the Foundation picking up the expenses of the attendees. In some cases, there were no more than eighty or ninety participants who heard a small cadre of invited speakers. Before long some of the regular attendees such as John Bourne, Burks Oakley, Karen Swan, and Gary Miller saw that a small but vibrant community of early online learning adopters was forming and recognized the need to disseminate information and the lessons learned in adopting online learning programs. As a result, the Journal of Asynchronous Learning Networks (JALN – now OLJ) was launched under the direction of John Bourne and colleagues at Vanderbilt University.

In 1999, summer workshops funded by the Sloan Foundation started at the University of Illinois in Urbana-Champaign and subsequently moved to Lake George, New York and other locales. These workshops were mini think-tanks attended by thirty invited participants who explored facets of online learning for three days from 8:00 am to 8:00 pm. Issues of quality related to learning effectiveness, faculty satisfaction, student satisfaction, access and cost-effectiveness were among the topics regularly discussed. Most of the presentations were evidence-based research talks. Because of their small size and emphasis on evidence, the give and take at these meetings was strikingly effective in allowing practitioners to share knowledge and experiences, to plan future directions, and to develop ideas for joint research and projects. These events also served as early breeding grounds for identifying individuals with expertise to assist others embarking on new initiatives for online learning programs.

In 2000, at one of these summer workshops, a brief discussion was held about how we could bring this community’s knowledge to a larger audience. At the November meeting of the Foundation grantees held in College Park, this discussion continued, and a decision was made to try to launch an international ALN conference. A committee led by Gary Miller and me was formed to develop the logistics for such a conference to be held in November 2001. The University of Central Florida (UCF) with financial assistance provided by the Foundation agreed to handle operational logistics and made arrangements to house the conference in Orlando at the Rosen Center. UCF’s Patrick Wagner put together an incredible staff of individuals who planned every operational and technical detail for the conference. Based on a call for papers, Gary Miller and I developed the program which included speakers from around the world who wanted to share their experiences in online learning. Unlike our previous meetings, attendees would pay a fee to attend the conference. In addition to the paper presentations, there would also be workshops, social events and exhibit booths. Truth be told, we only had about twelve exhibitors at this conference. Patrick Wagner did his best to spread the booths in a hallway to make it look like there were more exhibitors than there actually were. Unfortunately and with great sadness, on September 11th 2001, the attack on the New York City’s Twin Towers had occurred killing almost 3,000 people. There were also anthrax attacks in Central Florida when letters containing anthrax spores were mailed to several news media offices and to Democratic Party Senators. America was under siege and it couldn’t have been a worse time to launch a new conference in Orlando. People were literally afraid to fly. While there was a modest early registration, almost all activity came to a halt in September. In any case, we decided to go forward and the conference attracted about 360 people. The spirit at this conference both for our country and for online learning was extraordinary. Keynoters and speakers took time out to talk to their audiences about what our country was going through and their belief that righteousness and our values would prevail. This tone and atmosphere extended into their presentations on online learning. A seed had been planted and the rest, as the saying goes, is history. The ALN Conference in 2001 elevated the small community of Sloan Foundation grantees into a movement that led to the development of a major consortium of colleges and universities. Sloan-C became a catalyst for online learning throughout the country. In succeeding years, the conference continued to grow, made a profit and seeded other Consortium activities. In terms of participation, it continues today to be OLC’s most successful activity.

This year, we proudly celebrate the 25th Anniversary of our annual conference, Sloan-C and its successor, OLC.

Dr. Anthony G. Picciano is a Professor and Executive Officer for the Ph.D. Program in Urban Education at the Graduate Center of the City University of New York (CUNY). He is also a member of the faculty in the Education Leadership Program at Hunter College, the doctoral program in Interactive Pedagogy and Technology at the Graduate Center, and the CUNY Online BA Program in Communication and Culture. He has forty-four years of experience in higher education administration and teaching and has served as a director of computer services, dean, vice president, and deputy to the president at CUNY and SUNY colleges. He has been involved in a number of major grants from the U.S. Department of Education, the National Science Foundation, IBM, and the Alfred P. Sloan Foundation. In 1998, Dr. Picciano co-founded CUNY Online, a multi-million dollar initiative funded by the Alfred P. Sloan Foundation that provides support services to faculty developing online and blended learning courses.

Dr. Picciano has been on the Board of Directors of the Online Learning Consortium (formerly the Sloan Consortium) since 2001. His activities have included serving on the planning committees for the Annual Conference, the Annual Workshop on Blended Learning, and the Symposium on Emerging Technologies. Lastly, he has been an associate editor of JALN since 2002 and has edited five special editions. In 2010, Dr. Picciano received the Online Learning Consortium’s National Award for Outstanding Achievement in Online Education by an Individual.