Stranger in a Strange Land

My first encounter with Sloan-C was a summer symposium in the early 90’s at the University of Illinois, Champaign. Joel Hartman told me that it would be an interesting experience and indeed it was. What I encountered was a room full of strangers, all of whom had funding and talking code. For the life of me I couldn’t figure out what was going on or what the connection was other than Frank Mayadas. I didn’t know at the time that I would be spending years with the man. I presented some data for UCF and suddenly everyone wanted to have dinner with me. I met my friend Tony Picciano without a clue that we would do three books and endless presentations together. Who knew? As the years went by, the summer symposia became a means for Sloan-C (through Frank) to make course corrections, float new ideas and tell us we could and should do better. They were fun. The food was good, ideas popped, 30 year relationships developed and we pushed each other to do the “better” that Frank wanted.

“I am sittin’ among you to watch and every once in a while I will come out to tell you what time of night it is.” -Sojourner Truth

The Pump Don’t Work Because the Vandals Took the Handle

My dates are fuzzy but my first Sloan-C conference was in College Park, Maryland and it was small-very small. Sometime after that UCF took it over and moved it to Orlando’s Rosen Center- a great facility. But the thing I remember most was that there were so few vendors there that we had to pack them in a very small space to make it look like there was a good turnout. Today the conference is still in Orlando, at least for a while, but the vender display area rivals EDUCAUSE.

Sometime during that period Roxanne Hiltz and Murry Turof held a meeting at New Jersey Institute of Technology that I thought was going to be an informational thing but oh, no. Frank and Tony were there and we were planning a book. I came back with two chapters to write. So much for an informational meeting. “Leaning Together Online: Research on Asynchronous Leaning Networks-Starr Roxanne Hiltz and Ricki Goldman.” Check it out. It’s a good book.

“Great books are adaptable; they alter with us as we alter in life, they renew themselves as we change and re-read them at different times in our lives.” -Ali Smith

Tony and I connected and decided that we must have been centurions together at the outer edge of the empire in another life. At UCF we began our mode comparison work with a million plus observations finding that blended learning always held the edge in success (grade of C to better). At the same time Tony was writing in his blog (Tony’s Thoughts) about the virtues of blended learning. Back at UCF working with Morgan Wang in our Institute for Data Mining we published our now well-known (maybe infamous) paper, Dr. Fox Rocks, which showed that students not only did better in blended courses, but they preferred that modality over the other options. Given all of that we approached Frank about moving in that direction – he was not enthusiastic. Asynchronous online learning was his thing.

“No damn cat and no damn cradle.” -Kurt Vonnegut

That’s One Small Step for Man

After some convincing by Tony, George Otte and several others of us, Frank finally agreed to fund some small symposia on blended learning. That’s when I met my now dear friend Mary Niemic at the University of Illinois, Chicago, who had been selected to chair this meeting. As I recall, three out of four of them took place and evolved into the blended learning conference that ran for several years. Eventually that got blended (pun intended) into Innovate. I miss the blended conference.

“Houston, tranquility base here. The Eagle has landed.” -Neil Armstrong

I Get No Respect

All of us are aware of continuing concerns about the rigor and quality of online learning and certainly Sloan-C, now OLC, is on the front lines of that conversation. Although, in my opinion that will never go away. There was a breakthrough when I got a note from Frank with a manuscript attached for my comments. Turns out that he and John Bourne were doing an invited paper for the journal Science that was a pretty clear indication to me that the Sloan-C initiative was going to have an impact on higher education and was being noticed by one of the most prestigious journals in the world. Pretty cool stuff.

“There is such a thing as quality but every time you try to measure it something goes haywire. You just can’t do it.” -Robert Persig

You Folks Do It

One of my favorite things about this organization was the broad sweeping big ideas left to us for grounding in educational practice. Two good examples were finding a working definition for blended learning and figuring out the localness concept. These were great exercises that forced us to confront many more issues than finding a definition. There was a method to that madness.

“Don’t let the sound of your own wheels make you crazy.” -The Eagles

Three is a Prime Number

Circling back to the blended learning meetings at UIC, in one of the final meetings we broke the 30 attendees into three groups of ten to concentrate on different issues. Tony and I chaired the research group with the final decision being that we would do a book on blended learning research- so off we went. Tony and I attended several conferences looking for possible authors and within a year the book Blended Learning: Research Perspectives was on the market and quite successful (as successful as these kinds of things are). However, a few years later Routledge asked to do a second version. As we worked through these projects I kept mentioning to Tony that we really needed to do a research methods book, not really thinking that it would happen. So one day I received a note from Tony with the contract for the book for me to sign. Warning – if you suggest something it to Tony, most likely, he will make it happen. So, the three books that for all practical purposes grew out of the Sloan –C blended symposia are:

“All you have to do is write one true sentence. Write the truest sentence that you know.” -Ernest Hemingway

Four Grey Beards and a Girl

Because of the persisting conversations about the quality of online learning, somewhere along the line we got the idea of doing sessions at the OLC meeting entitled “Four Questions You Shouldn’t Ask about Online Learning” led by Patsy Moskal. The presentations involved George Otte, Gardner Campbell, Phil Long and Chuck Dziuban. They covered a wide range of topics and drew pretty big crowds. They were fun and we hope we did some good but I think ultimately we just ran out of questions you shouldn’t ask, although we thought there would be an endless supply.

“I don’t like myself without a beard.” -Jamie Dorman 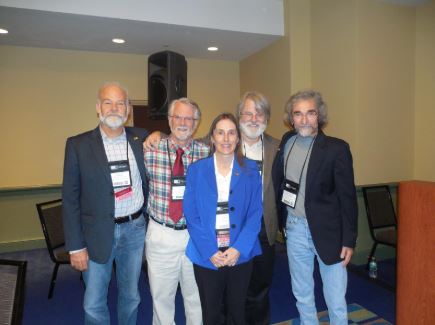 Don’t Hang Up. This is Not a Robo-Call.

One day I got a call from Peter Shea who is the current editor of the Online Learning Journal saying that he and I had received a director’s grant for the Sloan Consortium to do a study of student involvement in online learning. I have received a number of grants but never quite this way. This resulted in a two-year study with Peter and Patsy Moskal of what students view as an effective online environment. They turned out to be:

This was our experiment in having students being active researchers and it worked out wonderfully. Thank you to Sloan-C for funding this because this work gave insight into just how important the student voice is in our contemporary averment. Over the years we have followed up with a fun little snippet where faculty members are sharing the one comment on their end of course evaluations that has stayed with them their entire teaching career. Here are three examples from three faculty members.

We would love to hear yours.

“This guy is so boring my pillow needs a pillow.” -Rate My Professor

When Ralph Gomory and Frank Mayadas stepped away from the Sloan Foundation we wondered about many things:
A new name
Funding
The Conferences
The Journal
Leaders and staff
Direction and…
What the Hell was going on
But not to worry, OLC landed on its feet Phoenix like and is “Movin me on down the highway. Rollin me down the highway.” Thanks Jim Croce

“But the beauty is in the walking-we are betrayed by destinations.” -Gwyn Thomas